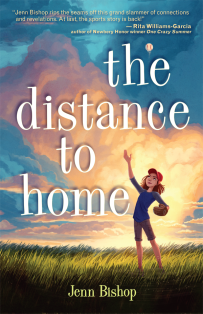 Last summer, Quinnen was the star pitcher of her baseball team, the Panthers. They were headed for the championship, and her loudest supporter at every game was her best friend and older sister, Haley.

This summer, everything is different. Haley’s death, at the end of last summer, has left Quinnen and her parents reeling. Without Haley in the stands, Quinnen doesn’t want to play baseball. It seems like nothing can fill the Haley-sized hole in her world. The one glimmer of happiness comes from the Bandits, the local minor-league baseball team.

For the first time, Quinnen and her family are hosting one of the players for the season. Without Haley, Quinnen’s not sure it will be any fun, but soon she befriends a few players. With their help, can she make peace with the past and return to the pitcher’s mound?

A former youth services and teen librarian, Jenn Bishop once read over 300 books a year as a member of the ALA Best Fiction for Young Adults Committee. Along with her husband and cat, she lives just outside of Boston, where she roots for the Red Sox. You can find Jenn online at www.jennbishop.com, and on Twitter as@buffalojenn .

Carter: What’s your favorite line from THE DISTANCE TO HOME and why?

Jenn: It’s so hard to choose one! But I think my favorite comes from a scene toward the climax of the book when Quinnen has made a big mistake and is wondering if she can somehow undo it. I so palpably remember how strongly I felt regret at that age, and how much it can ache when you’ve hurt someone and don’t know how to make things right again.

“As Dad and I sat out back, watching the stars and getting colder by the minute, I saw a shooting star. A real one. I wished for a time-machine, for a do-over. And then I closed my eyes real hard and counted to ten. But when I opened them, nothing had changed. It was still just me and Dad and my mistake.”

Carter: Which middle grade characters (classic or contemporary) would Quinnen most like to hang out with?

Jenn: I can see Quinnen having a real kinship with Ramona Quimby, though maybe the fact that they are both a little on the impulsive side might make their friendship a little explosive. I also think she’d get along well with Josh from Kwame Alexander’s The Crossover. She’d really relate to his competitive edge.

Carter: Can you talk about how you decided on the unusual (and totally compelling!) structure for your debut?

Jenn: So, interestingly, the idea for this structure came from my agent. In early drafts, The Distance To Home had some chapters set in the past, sort of like Morgan Matson’s Second Chance Summer, but it wasn’t until my agent suggested framing it as a dual narrative—two complete plotlines, one unfolding in the past, the other the present—that I actually wrote it that way. I’m amazed that she saw the potential, especially since I had to then completely flesh out last summer to make it proportional, but the finished product made it totally worth it. For the reader, being able to see Quinnen in both summers really accentuates her character journey. It also gives more room for the reader to connect with Haley. But where I think it most succeeded was in creating the narrative tension for the reader, who’s trying to put together what happened last summer to put Quinnen in the difficult place she finds herself when the story begins.

Carter: What’s your best advice for a writer to nail middle grade voice?

Jenn: Read your childhood diaries! Okay, in truth you may find that the “voice” of your childhood diaries is kind of generic, but the content will bring you back to that age, those emotions, and those experiences—all of which, I firmly believe, will help you get in touch with your inner eleven year old. At the same time, if you’re several decades removed from contemporary readers, pay attention to their world, because some things have changed. Watch TV shows with characters that age, pay attention when you’re in line at Target or at the library, etc. The important thing is to not try too hard to mimic the generic vocal stylings we attribute to this age group. You’re always trying to access the voice of your character, who is a specific individual with his or her own background, likes and dislikes, etc.

Chocolate covered almonds from Trader Joe’s. I specifically keep them in a separate room from where I write so I have to walk over to get them. Counts as exercise, right?

Total pantser. What’s the fun in writing if I already know what’s going to happen?

Something you love to read but don’t write yourself?

Besides baseball, what’s the best thing about summer?

Lying on a hammock outside. Really, anything outside.

THE DISTANCE TO HOME can be ordered from Indiebound, BAM, Barnes and Noble, Powell’s, and Amazon. 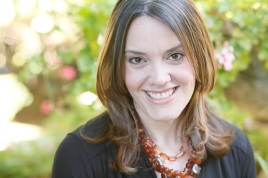 Carter is a librarian at an independent school in Los Angeles. She is the author of A Rambler Steals Home (HMH, 2017) and two forthcoming picture books from Chronicle Books. She is an Emmy-winning visual effects and motion graphics artist whose career has covered all the nooks and crannies of visual storytelling. She writes about picture books and graphic design at her blog, Design of the Picture Book, and you can find her on Twitter @carterhiggins.

A Rambler Steals Home is a middle grade novel about Derby Christmas Clark and her small-town Virginia community, which harbors secrets within its battered baseball stadium. It will be available on February 28, 2017 from HMH Books for Young Readers.