Witch’s apprentice Bridey Corkill has hated the ocean ever since she watched her granddad dive in and drown with a smile on his face. So when a dead girl rolls in with the tide in the summer of 1913, sixteen-year-old Bridey suspects that whatever compelled her granddad to leap into the sea has made its return to the Isle of Man. Soon, villagers are vanishing in the night, but no one shares Bridey’s suspicions about the sea. No one but the island’s witch, who isn’t as frightening as she first appears, and the handsome dark-haired lad Bridey rescues from a grim and watery fate. The cause of the deep gashes in Fynn’s stomach and his lost memories are, like the recent disappearances, a mystery well-guarded by the sea. In exchange for saving his life, Fynn teaches Bridey to master her fear of the water — stealing her heart in the process. Now, Bridey must work with the Isle’s eccentric witch and the boy she isn’t sure she can trust — because if she can’t uncover the truth about the ancient evil in the water, everyone she loves will walk into the sea, never to return. 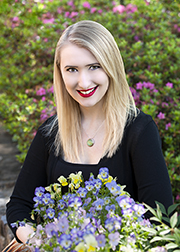 Sarah Glenn Marsh is an author of young adult novels and children’s picture books. An avid fantasy reader from the day her dad handed her a copy of The Hobbit and promised it would change her life, she’s been making up words and worlds ever since. She lives in Virginia with her husband and their tiny zoo of four rescued greyhounds, a bird, and many fish. When she’s not writing, she’s often painting, or engaged in nerdy pursuits from video games to tabletop adventures. You can visit her online at http://www.sarahglennmarsh.com/ and follow her on Twitter @SG_Marsh.

Heather: First off, what made you want to become an author? How old were you?

Sarah: Despite a love of books that I can remember reaching as far back as preschool, I actually didn’t consider being an author until I was about 23! In college, I earned my Master’s in early childhood education, but my heart was always with writing, and I jotted down story ideas and snippets constantly! It was actually my husband who saw my passion for writing and—like a good partner should—encouraged me to take it seriously, because he believed in my talent (even when I didn’t, which was often); I’m very grateful to him for always giving me the support I need! I was 24 when I began querying for the first time, and now at 28 (where did the time go?!?), I’m happier with my life overall because I’m finally doing what I love.

Heather: You mention on your website how important your CPs are to you as a writer. How did you go about finding great CPs? How have your CPs helped you over the years?

Sarah: The first time I went searching for CPs, I stumbled across Maggie Stiefvater’s Crit Partner Matchup that she hosts (annually, I think?) on her blog. I met my first two CPs through that, another at an online writer’s conference (hi, Katie!), one through the writing resource site Agent Query Connect, and others through mutual writer friends. They’ve all been great CPs because none of the connections were forced; they came about because the other person and I got along so well before exchanging any work, and had similar interests/literary tastes, and so on.

My CPs come from a variety of backgrounds and strengths—one schools me on historical details, another is an amazing line editor, and another hardly reads any fantasy, so she points out places in my work where things get a little dense for non-fantasy readers. They’ve all taught me things, shaping me as a writer over the years, and I’m deeply grateful!

I think the best way to sum up my relationships with my CPs is this: even though our writing journeys haven’t been the same or even similar in some cases, and even though I don’t regularly exchange work with some of them anymore, I still keep in touch with all of them and am proud to call them my friends!

Heather: Your upcoming books, Fear the Drowning Deep and the later Reign of the Fallen, sound awesome, and also very, very different. Was this intentional? Do you find yourself driven to explore different genres and subjects, as opposed to finding a “groove” and staying there?

Sarah: First of all, thank you so much!

I suppose this huge departure from FTDD was intentional, and there are several reasons behind it–the first simply being that I’m someone who reads widely/is interested in many genres. I’ve had ideas for sci-fi stories, historicals, mysteries/thrillers, ghost stories, and so on. I enjoy exploring other worlds and time periods, so while I loved transporting myself to the Isle of Man and the early 1900s in FTDD, I equally loved creating an entire world from scratch in Reign of the Fallen.

Even though FTDD is my first book to publish, you might (or might not, depending how well you know me) be surprised to hear that most of my yet-unpublished mss are epic fantasy. There’s something so freeing about being able to create a world, to define all the rules, that really appeals to me, so that’s the genre I most often gravitate towards in telling my own stories. The difference in these books was also in part shaped by where I was in my life when I wrote each; at the time I had the idea for Reign, which came after FTDD, I was dealing with the potential loss of someone close to me (who did, thankfully, recover); Reign is a much darker book than Fear, as I was working through darker feelings alongside my MC in that book, Odessa, who deals with death and pain and grief. Sounds like a super fun book, huh? 😉 Yet in many ways, it is!

Too, when I began writing Reign, I had also realized how important it is for readers to be able to see themselves reflected in books; you’ll find that the world in Reign is diverse in several ways, and yet differs from ours in that it’s not frowned upon–by anyone–to be gay, to look different than someone else, to worship differently, and so on. They have plenty of conflicts from other sources! The MC in Reign is also bi, because I decided to write the heroine who Teen Me needed, who I could have seen myself in and looked up to. I hope at least one reader will see themselves reflected in her, too, and that Odessa’s story will be just the thing they were searching for. That would be truly awesome!

Heather: What was the revision process like for FtDD? Did you get stuck anywhere, and if so, what got you out of it?

Sarah: When I revised FTDD with my editor, I was sick with something I called the flu, but which in hindsight was really just an upper respiratory virus from hell! Needless to say, revising while very sick and not sleeping made everything about the process a challenge. I don’t remember one huge moment where I got stuck, but I remember lots of little moments where I felt unsure, and one thing that really helped was my editor’s style; in addition to a big-picture editorial letter, she had marked up the manuscript with suggestions and thoughts that tied in really well with everything in her editorial letter. This made it easier for me to address certain changes throughout the book.

The other thing that helped me revise FTDD was simply experience. By the time I did edits on this book, I had revised other projects with my agent and with editors; FTDD itself had been through two R&Rs at other houses, so the revision process was already a familiar one. Having plenty of experience helped me to know when I needed to, for instance, bite the bullet and rewrite a whole scene or chapter in order to fix an issue. Once the first major pass was done, things became much smoother sailing with revisions on this book, and it was fun seeing everything fall into place!

Coffee and tea. I have to have my morning coffee, but the Anglophile in me is just as passionate about tea!

Buffy all the way!

Band you loved as a teenager that you still listen to?

What were you reading at 16?

At 16, I read and was swept away by Lloyd Alexander’s Prydain Chronicles. These inspired me to then read the Welsh book of mythology, The Mabinogion—speaking of which, I need to put some of that awesome mythos in a story one day!

Too many to name! Unfair question! But: Minerva McGonagall; Luna Lovegood; Sirius; Dobby. Yes, that was way more than one. See what you made me do!

In the morning, from around 9-noon. It’s when the house is quiet and I focus best.

FEAR THE DROWNING DEEP can be ordered at amazon.com,  powells.com, booksamillion.com, barnesandnoble.com, and indiebound.org

Heather Fawcett is the debut author of EVEN THE DARKEST STARS (Fall 2017) and its sequel, both from HarperCollins/Balzer+Bray. She has worked as an archaeologist, an aerospace technical writer, and a backstage assistant for a Shakespearean theatre festival. In her spare time, she can be found reading, hiking, reading, eating ice cream, or reading. She lives in Vancouver.

Set in a fictional Himalayan kingdom, EVEN THE DARKEST STARS is the story of a teenage girl enlisted by a legendary explorer to help him climb the kingdom’s deadliest mountain – only to discover that his true mission may threaten her whole world.